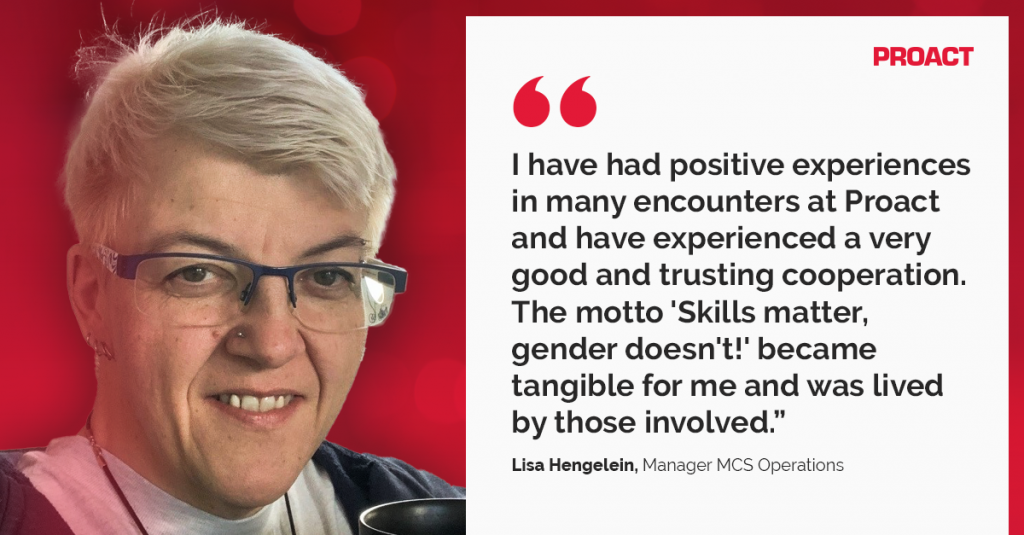 This is article two of three in our Women in Tech series, featuring stories from women at Proact about their experiences in the IT industry. Check out our first article in the series here.

When did you join Proact, and what is your role?

I have been with Proact Deutschland GmbH since July 2019. My role is manager of MCS (managed cloud services) operations.

My main task is to lead the MCS team. I also provide the consumption data for billing our customers and the required license data for the suppliers. Finally, I am involved in several group workstreams, such as reporting & dashboards, change & request management and hub stakeholder meetings.

Was it clear to you from the beginning that you wanted to work in the tech industry, or did you only decide to do it after other work experiences?

I started out in a very technical profession and then developed more and more in the direction of IT over the course of my working years. In 2000, I switched from the customer support side to IT and worked in application support. Since then, I have remained faithful to the tech industry.

It is well known that IT jobs are still predominantly filled by men. To what extent has this fact shaped your education and career path?

Not at all. I started out in a “male profession”. My training cohort consisted of 100 men and eight women. However, I never perceived this as a bad thing. I grew up without these barriers in my head.

In your experience, is the IT industry becoming more inclusive over time?

In my perception, it depends a lot on the company. At a previous employer, more than 30% of the employees were women. At this level, you didn’t really perceive the discrepancy in your daily work. At two other previous employers, the ratio was significantly worse again. The result of this was my feeling that I had to go the extra mile to prove my abilities simply because there were so few other women around.

What has been your experience as a woman at Proact?

I have had positive experiences in many encounters and have experienced a very good and trusting cooperation. The motto “Skills matter, gender doesn’t!” became tangible for me and was lived by those involved.

In your opinion, is there anything everyone could do to promote gender diversity in the IT workplace?

I think the most important thing is to get that barrier out of your head that a person is naturally better or worse at something just because of their gender.

Other than that, people should just be open and not think in boxes. Remember that everyone has their own individual abilities and interests, and that these aren’t determined by their gender.

Would you like to learn more about where the IT industry is heading when it comes to gender diversity? Check out our podcast on the topic, available on YouTube, Spotify and Apple Podcasts.

Why cybersecurity awareness is key to levelling up your security posture